Nursing in the 1800s: A timeline and job description

Nursing in the 1800s: A timeline and job description

NURSING IS AN EVER EVOLVING FIELD. When considering what nursing was like 50 years ago, we realize just how much has changed. Improvements in technology, more independent training, the structure of medicine and the increase in nurse practitioners are just some of the groundbreaking changes that have occurred in the past few decades. It’s possible that maybe you have even seen some of these changes occur in your own lifetime. Recognizing these changes is an important part of appreciating modern nursing as it is today, but what about comparing nursing in 2016 to nursing two millenniums ago? Let’s do it.

We offer Online ACLS, PALS and BLS Certification and Renewal 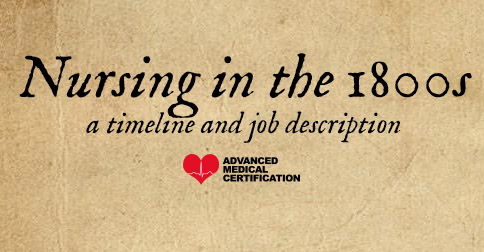 Nursing in the 1800s: A Timeline of Key Events A Nurse's Job Description from 1887 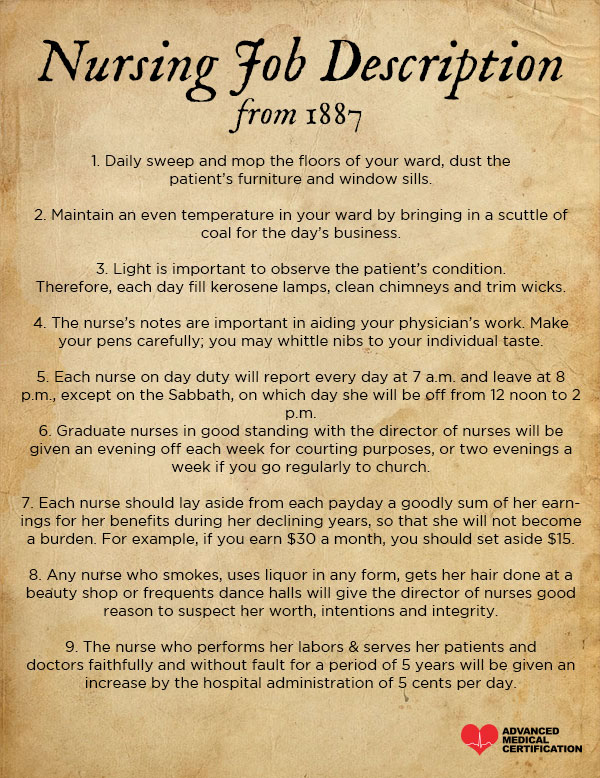 Florence Nightingale was one of the most influential nurses during the 1800s. Her actions are not only honored today but also are still practiced in 2016. Here are three ways Nightingale shaped modern nursing.

Nightingale was the first nurse to care for her patients, not just the sickness or injury he had.

1. Round the clock patient care During the Crimean War, Nightingale was recruited (with 38 other nurses) to Turkey to care for Britain’s wounded army. Nightingale became known as the “Lady with the Lamp”, a title given to her due to her frequent check ups on the wounded soldiers throughout the night. At this time, checkups and night time care was unheard of. Today, many nurses follow in Nightingale’s path, working night shifts and making patient care the top priority. A painting of Nightingale checking on a patient during the night can be found to the right.

2. Advocating for her patients Nightingale was the first nurse to care for her patients, not just the sickness or injury he had. Today, providing patient care is a pillar within hospitals and health care facilities. Nightingale approached each of her patients on an individual level, instead of simply attempting to treat the diseases and ailments. She developed an understanding of everyone she tended to, a revolution that inspires nurses in 2016. Below, you will see painting of Nightingale (as the Superintendent of Nursing) with other nurses, church members and soldiers in Turkey during the war.

During her service in the war, Nightingale began collecting and recording information, specifically mortality rates, on British soldiers. Her findings were shocking, and she knew she needed to make a change. Nightingale began improving hospital hygiene and sanitation and ultimately made the connection between poor sanitation and disease. She was the first to record her findings, voice her opinion in her nursing practice, propose the evidence and make the change. This is a practice still valued and implemented in modern nursing. Below, you will find a digital copy of the “causes of mortality in the Army in the East” by Nightingale in the 1850s. Check out this video!

All information was found on Wikepedia and Penn Nursing Science.